The brand Skoda is working upon introducing a new Skoda Superb, in the month of November, 2015

The brand Skoda is working upon introducing a new Skoda Superb, in the month of November, 2015.  The car should be carrying a price tag anywhere between INR 20-25 Lakhs.

Overview of the Skoda Superb:Making the cars look sharper than ever before seems like the latest trend while the construction of the cars is concerned. Most of the car manufacturers like the VW, and now Skoda have obtained, however the only side effect of this new trend and design language is that it has left most of the cars look similar to each other. One car that looks like reflecting the similar cues the Skoda Superb 2016 which has been spotted without a mask. It is predicted to be rolled out by the next year mid that indicates that it should be rolled out on the domestic market of our country by the end of the current year of 2015.

Exterior:The images unveiled that the Skoda Superb 2016 is lengthier and wider than the existing car. It has a layout that took inspiration from the Vision C concept that was revealed previously this year. Though, what we can also see is that the folks at Skoda are retaining most of the complete design from the existing model. The face of the car acquires a fresh bumper, modified Skoda proprietary grille along with a bigger hood that we assume has been enlarged for a bigger set of motors. The lines that were typically circular look much edgier now.Talking about the sides, we can notice the car has preserved a lot of the present car?s outline but the roof line has been tempered to some extent. While the sides are compared with the B8 Passat, the lines look identical to the gather of the wheel arches as well as the bigger wheels.The rear end appears somewhat different from the Passat and more suitable to the current car. The ends around the boot lid now look better sorted and appear to be missing on the chrome strip at the foot. However, this is likely to be exclusive for the European markets. 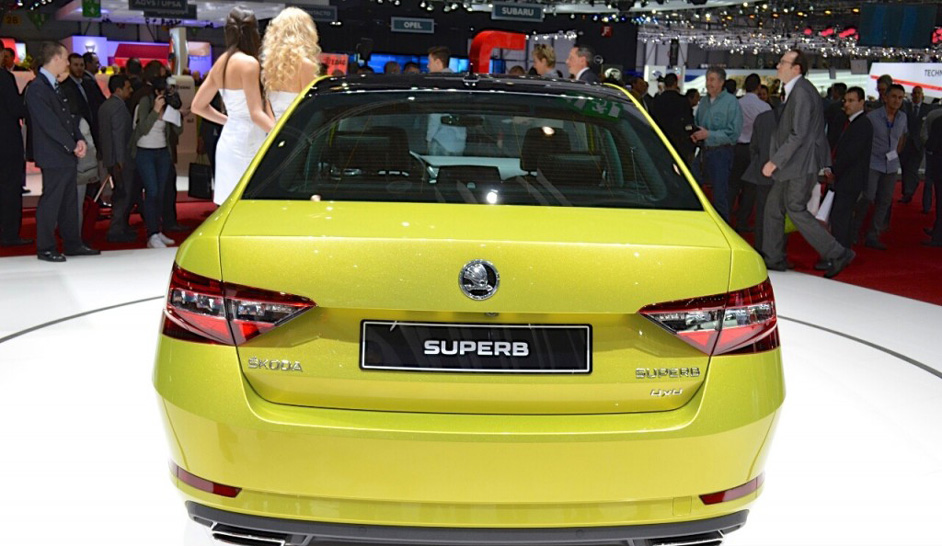 Interior:The Skoda Superb 2016 is projected to obtain the similar cabin design and layout as the B8 Passat however with the noticeable alterations in the tones of the fabric, logos and graphics for the touchscreen display. The inside is assumed to have fewer toggles in a bid to organize the look. Regular features are estimated to comprise-two zone climate control, touchscreen infotainment system, electric adjustment for seats at the front, rear AC vent and leather material for top-spec variants. We also believe that with this model Skoda might start presenting a rear seat entertainment package.

Engine & Transmission:The Skoda Superb 2016 is assumed to offer a similar engine like the present car. Talking about the petrol variant, the engine would be the 1.8-TSI that produces 158bhp and a torque of 250Nm whereas the diesel on the other hand is the 2.0-L TDI that pulls out a 138bhp and a torque of 320Nm. Transmissions are expected to consist of a six-speed MT, seven-speed AT both of the units direct the power to the front wheels. Skoda is also anticipated to include an AWD option in the top-end variants.

Pricing:The Skoda Superb 2016 is predicted to be estimated considerably higher than the existing variant as it is an entirely new vehicle and comes built-in with a host of new technologies. Once launched, it would rival the VW Passat, Honda Accord, Audi A3 and the Mercedes-Benz GLA.