New KTM has been launched with new version of RC 200 in India The 2017 new bike priced at Rs 1.71 lakh ex-showroom Delhi KTM 2017 has with sportier look and it has added orange graphics on the black and white color variants

New KTM has been launched with new version of RC 200 in India. The 2017 new bike priced at Rs 1.71 lakh (ex-showroom, Delhi). KTM 2017 has with sportier look and it has added orange graphics on the black and white color variants. Besides its pillion seat gets an additional 12mm padding for more comfort.

The New RC 200 range was introduced in Indian market before two years ago with recent updates on the twin models and its look sportier and edgy also. The New RC 200 gets a new livery with almost no change on the mechanical front. Both new models were showcased at the EICMA 2015 motorcycle show in Milan and since then have been awaited eagerly. All the other models in the KTM variants 390 Duke and 200 Duke will also be rolled out with in the coming months. 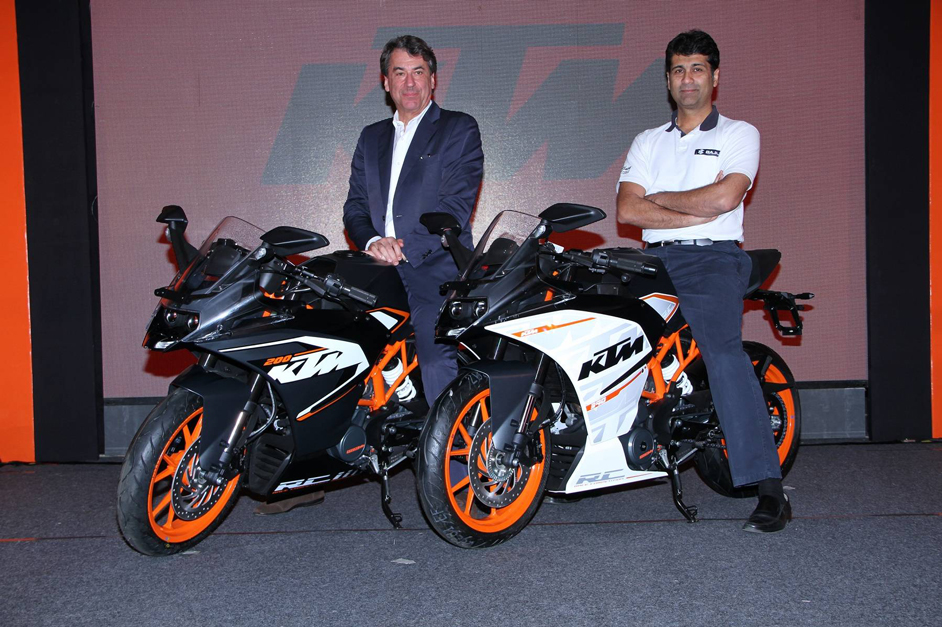 KTM RC 200 mechanical updates are superficial and the bike continues to use with the same 199cc, single cylinder unit from the preceding model. Engine is coupled with a 6-speed gearbox that transmits power to the rear wheel. It continues to use the underbelly exhaust which is absent on its larger twin, RC 390. Stopping power comes from the 300mm disc unit at front and 230mm at rear.

The New KTM design with respect to the changes made to latest version, it is looking styling that gives it a vivid look. Its monotone black paint job has been replaced with the dual-tone black and white color scheme with orange graphics body. The KTM based on the design of the Duke 200. The bike have dual projector headlamp, DRLs with a large windscreen. Its new bulging fuel tank is now colored in white and works well for the brawny look. Beside it, the steel trellis frame painted in orange enhances the visual appearance.

New KTM RC 200 specification is comes from the same unit that served the predecessor. The 199cc bike have single cylinder, liquid-cooled engine is compliant with the Euro-4 emissions. The bike engine has 25bhp of power and 19.2Nm of torque. The New KTM engine’s uses a six-speed gearbox for transmitting power with rear wheel.

New KTM RC 200 features are no new addition and it continues to sport the same equipment as on the outgoing model. It gets the twin-projector headlamp cluster in front, high clip-on-handle bar, daytime running lights and clear windscreen. All other features on the bike include LED tail lamps, brake lamps, side indicators on wing mirrors, large seat with additional 12mm padding, muscular white fuel tank, orange steel trellis frame and large tires.