DSK Benelli coming up with 5 Hi-end Bikes in India from INR 2.83 lakhs

Going to be a Bike storm in India … With a DSK Benelli coming up with 5 Hi-end Bikes (INR 2.83 lakhs) in India.

Come choose your ride in between two, three and four cylinder models available. DSK BENELLI heaves out five products in India. Here are the details regarding the same. 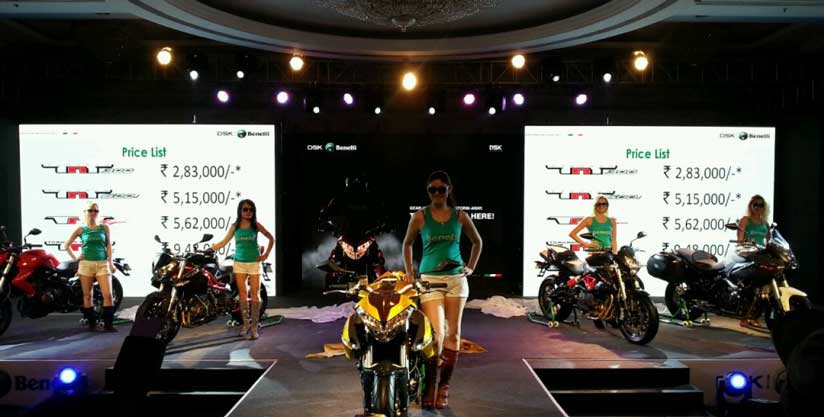 These are based on models their ex showroom price list:

As it was announced previously in October 2014, these designer machines would be retailed at their outlets across the nation from today.  Also at the brand’s own showroom in Pune. To start with DSK Benelli would function at 9 major outlets in good paying capacity cities like Mumbai, Bengaluru, Chennai, Hyderabad, Delhi, Ahmedabad, Kolkata and Goa. All the products are assembled in a CKD kits fashion.

The first category TNT(Tornado Naked Tre) 302, possesses  a 300cc twin cylinder engine. 36.2 bhp and 2.75 kgm with a 26.9 NM of Force, and is supported with a 6 speed gearbox. This is the only 2 cylinder product from the company for its Indian consumers.

This power packed bike come with an inline four cylinder 600cc engine.80.5 bhp and 5.3 kgm with a 51.97NM of Force. Comes with other exciting features like USD front suspension, a monoshock rear, two disk brakes!!!

This powerful beauty shares its engine to its sibling 600i.Although it comes with a higher 54.91NM Force. A half fairing nd two projector headlights in addition . This one consists of 5.6 Kgm.

Before you get sweeped by its look…..these models belong to the upscale segment of them all.The TNT 899 is powered by an inline three cylinder 899cc engine with a 123.4 bhp and 9kgm with a 88.25 NM of Force.

This powerhouse sports an amazing 1131cc inline three cylinder engine producing 155.6 bhp and 12.2 kgm with an unbelievable 119.64 NM of Force.